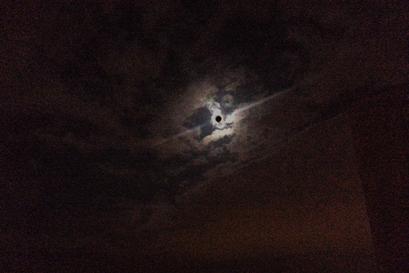 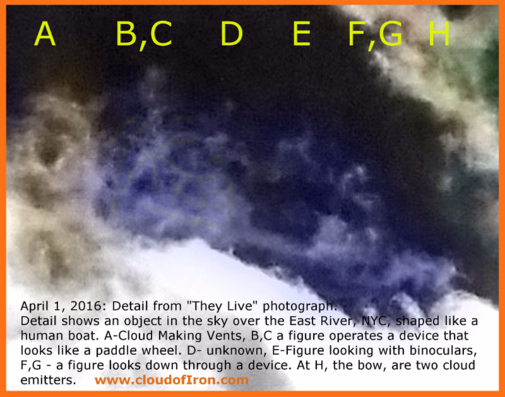 Find out what you should do now! Behold He Cometh With The Clouds/ Cloud of Iron information On The Apocalypse. Bible study with a dose of reality.

www.pocketapocalypse.com
Designed for mobile apps.
Signs Appearing... Look again at 9/11 WTC and more recent: Huge Key Appears in Sky over New York City. Is it a ref to Revelation 3:7 ?

Long clouds with large hatch/ramps that open so smaller cloud cloaked craft can have a base of operations? SciFi ? Insanity ?  I was sure I was seeing smaller clouds 'docking' with  larger ones. See above right sequence showing just that. ​​One thought I had seeing all the signs in the sky the past few years was:  Thousands of years ago, the Sumerians of early Mesopotamia; in what we now call 'The Cradle of Civilization' recorded their history on thousands of baked clay tablets. They speak across six millennia of  a cyclical cosmic event that defines the end of one epoch and the beginning of the next.  These warnings are echoed in the Christian Bible and the legends of many cultures such as the Hindu, Mayan, Egyptian and Hopi peoples. Is it time for the 'Destroyer' of ancient Egypt, Hindu's Shiva, or the falling star 'Wormwood'  of the Book of Revelations to wreak cataclysmic destruction  on the Earth?   I don't really know.

Modern Astronomers discovered a large celestial object in the 1980's. Planet 'X, inbound to our Solar System, and far away in the 1980's  may be the  same object that the ancient Sumerians knew as 'Nibiru.'  For the past few years there have been great signs in the heavens - ignored by many but there nevertheless.  'The Apocalypse' or 'Revelation', the final book in the Christian New Testament; is often quoted  due to it's extensive references to the 'End Times.' But there was  apocalyptic knowledge earlier, in the 'Old Testament' or Hebrew Bible. The least known of all the "minor prophets" in the Hebrew Bible is Habakkuk who appears in the eighth  book of the section "12 Minor Prophets."​                       It was there recorded,  that God  spoke to Habakkuk saying;       "Write the vision - And make it plain on tablets, That he may run who reads it.  For the vision is yet for an appointed time; But at the end, it will speak, and it will not lie. Though it tarries, wait for it; because it will surely come, It will not tarry. " (kjv) It is in that spirit that I have setup this website to 'Write the Vision...' and honestly record the unusual seen in  the skies of New York City.

So many unusual events have happened in my life - even prior to my apparent uncanny ability to 'catch' these photos, many of which - I awoke for no apparent reason in the middle of the night or I decided to look up at just the right time. I take no credit for this site. That, belongs to God.  I'm no prophet - merely a witness & reporter of great events.

News Reports 'Face' on Comet 67P - A Comet's Tale
Click here for Comets and Tsunamis in the NYC's clouds.
Skeptic? 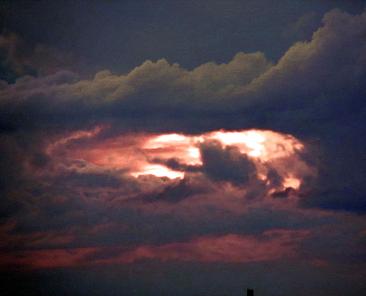