Paper with photos: Object Near Sun Causing Climate Crisis; the Cloud of Iron
Use Edge to Read Paper Aloud Here:

A hooded man with a very white face stares resolutely down the street at another taller hooded figure who brandishes a scythe like weapon. The yellow box outlines the contrast enhanced soldier whose tripod mounted weapon is aimed towards the taller hooded man. Many other odd images are in this small detail of an 'existing light' night time  photo of  an intersection on Queens Boulevard, Forest Hills, New York. These items were not visible to the naked eye and were found once the digital image was examined. Nothing added to this image. Contrast adjustments brought out this image.      Is this an archetypal image of the battle between Good and Evil ?

​There are theories, that the immense sculptures in the skies around the world are the works of men and their machines. To accomplish the things I have seen requires technology far beyond the level that world governments admit to. It would require invisible  flying craft that essentially are invisible and able to stay silently in one spot without rotors or turbines that would 'mess up' the sculptures. Has antigravity been achieved ? Invisibility technologies, if you read the news, is now appearing in the private sector. That means that it has been available as a military technology for many years.  We all carry cameras in our 'smartphones.' All one has to do is look. I am sure we will find out whether they are the works of Man, other intelligent beings or God.

"The Magician"
Made by simply inverting the colors on a NASA image of  Curiosity's  drill hole in a rock. 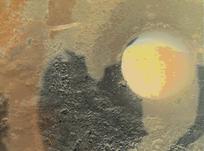 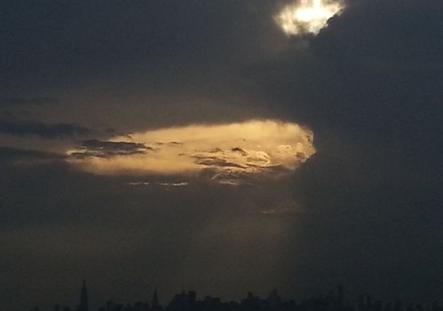 ​All Photos on this Website are Real. Photos are available for sale.

Some have been color or contrast enhanced in order to see the subject better in most cases the original image is displayed along with them.

1. NASA/JPL/University of Arizona and other NASA partners.

2. Photographs taken using various cameras by the author of this site. Every one of these Dramatic photos of the unusual skies over New York City were spontaneous and unplanned by the photographer. In many cases the priority was to make sure the event was captured rather than trying to get the 'best picture.' Many of the pictures have anecdotes associated with them as to how I got the pictures. I will try to include some of this information on the website.

Something has been going on for months now.  Are you trying to be aware of what's going on around you? Or, are you coming home , turning on the TV or internet and 'tuning out' ?

I am going to give you photographic information. You decide what questions are raised and what to do about it.

(NASA/JPL Products not for Sale)